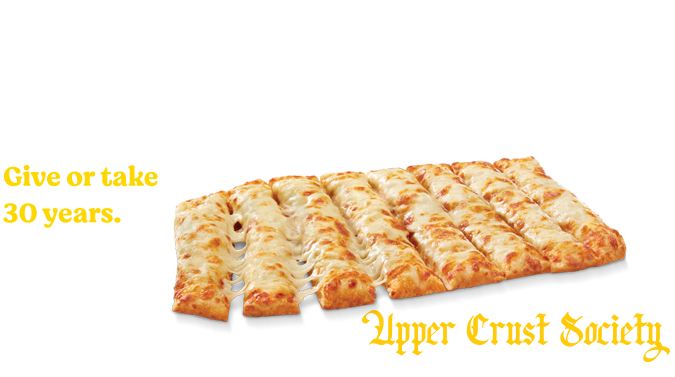 THAT'S NOT A TYPO

Our lawyers told us not to do it, so we found new lawyers. Join the Upper Crust Society to earn points on every Toppers order, and be entered to win FREE 'STIX FOR LIFE (or a ridiculously long time, anyway.)

Free Topperstix For Life Giveaway
NO PURCHASE NECESSARY. A PURCHASE WILL NOT INCREASE ODDS OF WINNING. VOID WHERE PROHIBITED.

2. AGREEMENT TO THE OFFICIAL RULES: By participating in the Promotion, all entrants fully and unconditionally agree to and accept these Official Rules and the decisions of the Administrator as final and binding in all matters related to the Promotion. Winning a prize (described below) is contingent upon fulfilling all requirements set forth herein.

3. HOW TO ENTER: To enter the Promotion, qualified entrants must, during the Promotion Period, sign up for Toppers’ new loyalty rewards program. Completion of the sign-up process for the rewards program entitles each entrant to one complimentary single size order of Original Topperstix. Limit one entry and one order per person. The loyalty rewards customer database as administered through the Toppers website (at www.toppers.com) and mobile application, as determined in Administrator’s sole discretion, is the official record for entrants in the Promotion. Toppers assumes no responsibility for incomplete, inaccurate, lost, mutilated, late, stolen, or misdirected entries.

4. ODDS: Odds of winning the prizes set forth in Section 6 of these Official Rules depends on the total number of eligible entries during the Promotion Period.

5. ELIGIBILITY: The Promotion is open only to individuals who, at the time of entry, are: new participants in Toppers’ customer loyalty program. In addition, the following persons are not eligible to enter this Promotion or claim a prize: (a) the employees, officers, directors, partners, equity holders, members and agents of Toppers or Toppers’ franchisees; (b) officers and employees of advertising, public relations, and sales promotion agencies employed by Toppers who are directly involved in the Promotion; (c) other contractors and agents of Toppers; and (d) any spouse, child, or family member residing as a member of the same household in the principal place of residence of any person designated in (a) through (c). This Promotion is void where prohibited by law.

6. PRIZES AND THE VALUE OF THE PRIZES: Each entrant in the Promotion is eligible to receive one free single size order of Original Topperstix. Additionally, one (1) grand prize winner will be randomly selected from the pool of eligible entries to receive the grand prize, (the “Grand Prize”). The Grand Prize consists of “Free Topperstix for Life,” which means one complimentary order of single size Original Topperstix per calendar week for a period of thirty (30) years beginning the week of July 26, 2021. Alternatively, the Grand Prize winner will have the option to select a cash prize in the amount of five thousand U.S. dollars ($5,000). This election must be made by the Grand Prize winner within forty-eight (48) hours of receiving the Prize Notification as described below. The approximate retail value of one single size order of Original Topperstix is seven $7.00 U.S. Dollars. The total approximate retail value of the grand prize is five thousand U.S. dollars ($5,000).

The dates and times of the Promotion may be subject to change and cancellation. Any comments made by a winner containing material that is inappropriate, offensive, indecent, obscene, hateful, tortious, defamatory, slanderous, or libelous may disqualify the winner, at Administrator’s sole discretion. The Released Parties (defined below) will not be responsible for acts of God, acts of terrorism, civil disturbances, work stoppage, epidemic, pandemic, government directive, telecommunications or computer errors or failures, or any other natural disaster or occurrence outside their control that may cause the cancellation or postponement of the Promotion. The Released Parties will not be responsible for any loss, liability, or damage arising out of a winner’s acceptance or use of a prize.

8. GENERAL PRIZE RESTRICTIONS: Prizes are subject to availability and change. Other than the Grand Prize, no substitution or cash redemption is allowed. The Administrator reserves the right to substitute the prize in whole or in part with other prizes of comparable or greater value, if the intended prize is not available for any reason, as determined by the Administrator in their sole discretion. This Promotion is governed by and shall be construed in accordance with Wisconsin law and is subject to all applicable federal, state, and local laws and regulations. Any and all taxes, including but not limited to federal, state, and local taxes, are the exclusive and sole responsibility of the winner. The winners will be required to provide his or her Social Security Number and appropriate tax documentation for tax reporting purposes. If required, the Administrator will file an IRS Form 1099 or similar document with the Internal Revenue Service for the fair market value of any prize.

9. GENERAL CONDITIONS AND RELEASE: The Promotion is subject to applicable laws and regulations. By entering and/or claiming a prize, each entrant (a) agrees to defend, indemnify, release, and hold harmless the Administrator, and its respective owners, parents, affiliates, subsidiaries, franchisees, directors, officers, agents, employees, managers, licensees, distributors, dealers, retailers, printers, representatives, advertising and promotion agencies, and any and all other companies associated with the Promotion, and all of their respective officers, directors, employees, agents, and representatives (collectively, the “Released Parties”) from and against any and all claims, causes, costs, injuries, losses, or damages of any kind that may occur, directly or indirectly, in whole or in part, arising out of the entrant’s participation in this Promotion or receipt or use of any prizes, including, but not limited to: (i) unauthorized human intervention in the Promotion; (ii) technical errors related to computers, servers, providers, or telephone or network lines; (iii) printing errors; (iv) lost, late, postage-due, misdirected, or undeliverable mail; (v) errors in the administration of the Promotion or the processing of entries, including but not limited to data entry errors resulting from or caused by the entering, keying, or mis-keying of the required information by entrants; (vi) injury or damage to persons or property that may be caused, directly or indirectly, in whole or in part, from entrant’s participation in the Promotion or receipt or use of any prize; (vii) the unauthorized or illegal access to personally identifiable or sensitive information or the acceptance, possession, use, or misuse of any prize or any travel or activity related to the receipt or use of any prize; (b) grants Administrator and each of its respective designees a worldwide, royalty-free, perpetual, irrevocable, non-exclusive right and fully licensable license to use, copy, reproduce, distribute, publish, publicly perform, publicly display, modify, adapt, translate, archive, store, and create derivate works from entrant’s entry (including any images) in whole or in part, in any form, format, or medium, of any kind now known or later developed; (c) consents to the use by the Administrator, and each of their respective designees of the winner’s name, hometown, photograph, voice, or other likenesses and prize information for promotion, advertising, and marketing purposes in any media or format now known or hereafter devised, throughout the world, in perpetuity, without additional compensation, consideration, notification, or permission, unless prohibited by law, and upon request will provide written confirmation of such consent; and (d) ACKNOWLEDGES THAT NONE OF THE RELEASED PARTIES OR ANYONE ELSE HAS EITHER MADE, OR IS IN ANY MANNER RESPONSIBLE OR LIABLE FOR, ANY WARRANTY, REPRESENTATION, OR GUARANTEE, EITHER EXPRESSED OR IMPLIED, IN FACT OR IN LAW, RELATIVE TO ANY PRIZE INCLUDING BUT NOT LIMITED TO, ITS QUALITY OR AVAILABILITY AND ALL SUCH WARRANTIES ARE DISCLAIMED IN THEIR ENTIRETY.

No failure to enforce any term of these Official Rules shall constitute a waiver of that provision. These Official Rules may be modified for clarification purposes without materially affecting the terms and conditions of the Promotion. If for any reason the Promotion (or any portion thereof) is not capable of being executed as planned, or in the case of infection by computer virus, bugs, tampering, unauthorized intervention, fraud, action of entrants, technical failures, or any other causes that, in the opinion of the Administrator, corrupt or affect the administration, security, fairness, integrity, or proper conduct of this Promotion (or any portion thereof), the Administrator reserves the right in their sole discretion to disqualify any suspect entry or entrant and/or to cancel, terminate, modify, or suspend the Promotion (or any portion thereof). Any entrant that enters the Promotion via a fake account (e.g., bot account) will be disqualified. The Administrator reserves the right in their sole discretion to cancel the Promotion in its entirety, if it becomes technically corrupted or because of non-authorized human intervention. In the event of any disqualification of a suspect entry or entrant, notice thereof will be posted and the determination of the prize winner will be made from among all eligible, non-suspect entries received as of the time of such disqualification, as the Administrator determines in their sole discretion. Entrants not complying with all rules are subject to disqualification. In the event of any termination, cancellation, or suspension, notice thereof will be posted on the Administrator’s website.

10. APPLICABLE LAWS: All entrants agree to comply with and abide by all applicable laws, including administrative rules and regulations, instructions, conditions and final decisions of the Administrator and all procedures established by the Administrator for the Promotion. In the event of a conflict between these Official Rules and any summary, representation, or other restatement of rules appearing in any advertisement, point of sale material, or other media, these Official Rules shall govern.

11. DISPUTE RESOLUTION: Except where prohibited by law, by entering and/or claiming a prize, entrants agree that in the event of a dispute concerning the construction, validity, interpretation, or enforceability of these Official Rules, the determination of the Administrator shall be final and binding. All issues and questions concerning the rights and obligations of participant(s) in relation to the Administrator and their agents shall be governed by and construed exclusively in accordance with the laws of the State of Wisconsin without giving effect to any principles of conflicts of law of any jurisdiction. Entrant agrees that any such action at law or in equity shall be filed only in the state or federal courts located in Milwaukee, Wisconsin, and entrant hereby consents and submits to the personal jurisdiction of such courts for the purposes of litigating any such action. EXCEPT WHERE PROHIBITED BY LAW, BY PARTICIPATING IN THIS PROMOTION, EACH ENTRANT AGREES THAT: (A) ANY AND ALL DISPUTES, CLAIMS, AND CAUSES OF ACTION ARISING OUT OF OR CONNECTED WITH THIS PROMOTION, OR AWARDING OF THE PRIZES, SHALL BE RESOLVED INDIVIDUALLY, WITHOUT RESORT TO ANY FORM OF CLASS ACTION; AND (B) ANY AND ALL CLAIMS, JUDGMENTS, AND AWARDS SHALL BE LIMITED TO ACTUAL OUT-OF-POCKET COSTS INCURRED, INCLUDING COSTS ASSOCIATED WITH PARTICIPATING IN THIS PROMOTION BUT IN NO EVENT ATTORNEYS' FEES; AND (C) UNDER NO CIRCUMSTANCES WILL ANY PARTICIPANT BE PERMITTED TO OBTAIN AWARDS FOR AND HEREBY WAIVES ALL RIGHTS TO CLAIM PUNITIVE, INCIDENTAL, AND CONSEQUENTIAL DAMAGES; ANY OTHER DAMAGES, OTHER THAN FOR ACTUAL OUT-OF-POCKET EXPENSES; AND ANY AND ALL RIGHTS TO HAVE DAMAGES MULTIPLIED OR OTHERWISE INCREASED.